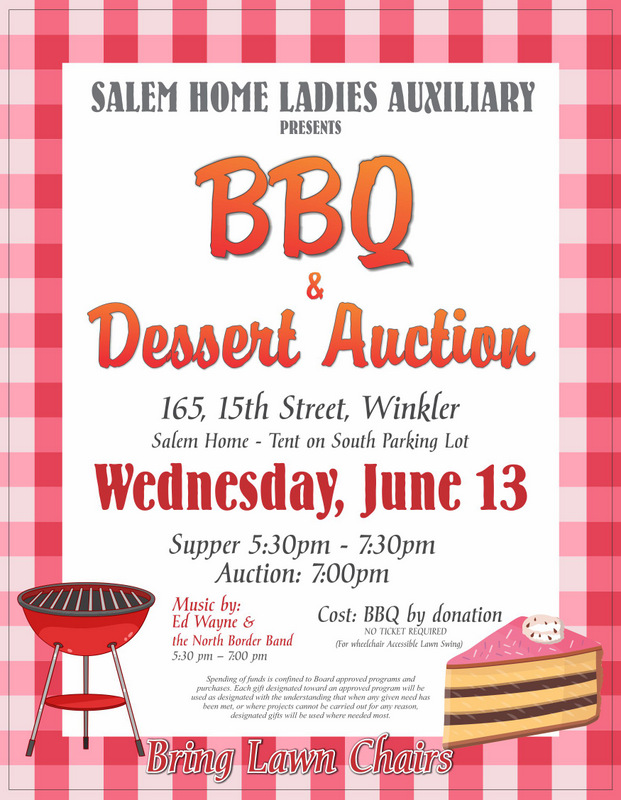 WINKLER, MB – Salem Home Ladies Auxiliary President, Hilda Friesen today announced that the Ladies Auxiliary will host a fundraising BBQ & Dessert Auction on Wednesday, June 13th in the tent on the south parking lot at Salem Home (165 – 15th Street, Winkler).  Supper will be served from 5:30 pm – 7.30 pm; with a Dessert Auction of 12 delicious desserts donated by local businesses at 7:00 pm.  BBQ by donation; no ticket required.  Proceeds will be used for wheelchair accessible Lawn Swings.

The event will feature music by Ed Wayne & the North Border Band starting at 5:30 pm. “Playing music was always a very large part of my formative years.” Ed recalls “playing in Church and many talent nights in school.”  Fast forward and Branded Free was born, a band named after a song Ed wrote, which allowed Ed to exercise his song writing skills as well as sing some great country gospel songs. Ed Wayne and The North Border Band have entertained audiences in southern Manitoba for a number of years.  His first album Waitin’ for a Whistle was released in 2013.  In 2015 and 2016 Ed received a Male Artist of the Year nomination from Manitoba Country Music Association.  Ed’s latest album, Something Sweet, was released May 31st.

“Not only is the swing a safe, fun intergenerational activity for all residents, their families and friends, said Marilyn Nelson, Director of Resident Care Services, “the benefits of the therapeutic motion reduce anxiety, restlessness and agitation … providing a rocking motion that is soothing, relaxing and comforting. Swinging together with staff, family and friends of all ages provides socialization, promotes relationships … improving the quality of life of residents. We have a family that comes every afternoon to spend time on the swing, the resident sitting on the swing with a couple of family members while others sit on chairs nearby enjoying coffee and conversation together. We also have another resident who often goes on his own to sit on the swing with his cup of coffee enjoying the gentle rocking motion while he reads his newspaper.  The swing is a special place that unlocks residents’ memories and speech.  We witness this joy particularly with one resident who is able to keep a conversation going while she is on the swing, who otherwise struggles to finds words.”

“After learning about the benefits of the swing and that it was wheelchair accessible there was a desire to purchase one,” said Hilda Friesen, Ladies Auxiliary President, “and now, seeing the resident’s enjoyment is amazing! There is often a waiting line to use the swings … so it’s our goal to bless the residents with another swing or two through the proceeds of the June 13th BBQ & Dessert Auction.”  Each swing costs around $9,000.