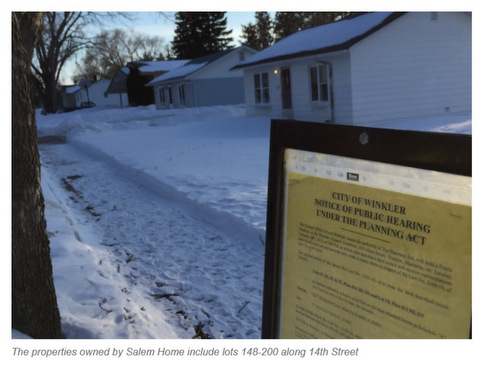 With 12 percent of city residents over 55 living with Dementia in Winkler (the highest rate of all communities located in the region) Salem Home has revealed preliminary plans for a proposed 60 bed expansion.

For a number of years, the care home board has been collecting properties along 14th St. to expand Eastward.

So far, they’ve amassed seven properties along the West side of 14th St. including another property on the South side of Salem Crescent.

“As we started looking at the needs of the community… we started saying, “Ok if we ever want to build additional beds we need land,”” Salem CEO Sherry Janzen explains.

The proposed 60 additional beds would bring the facility to a total of 205 beds. Each building would be three storeys highAs part of the project, The City of Winkler held a public hearing on Tuesday to rezone the lots surrounding the facility from Residential Single Family Zone to Institutional.

Phase One of the project would include the construction of two additional buildings. Phase two would add a third structure, with another 30 beds.

The structures are designed to fit in with the surrounding neighbourhood, taking inspiration of the small house model, a home-like environment.

Though the project hinges on funding approval from the Provincial government and Manitoba Health.

“We know they are strapped for cash, so it’s going to be a process,” Janzen says.

The formula Manitoba Health uses to determine the number of needed beds is 110 personal care beds for every 1000 people over the age of 75.

However, with Dementia affecting more people locally in their 40’s and 50’s, there’s a growing gap between the formula and the reality facing Salem Home.

“Manitoba Health, through no fault of anyone, hasn’t really taken into account younger and younger residents are coming into personal care homes,” she says. “Because there are no other options, especially in rural Manitoba.”

Currently Salem Home employs over 300 and has budget of over $12 million.