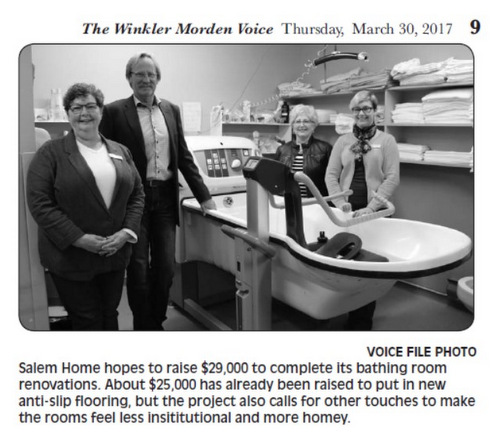 Donations made to the Salem Foundation this fall and winter have taken a big bite out of the personal care home’s bathing rooms renovation project, but they still have a ways to go.

Salem Home has raised nearly $25,000 over the last few months to install new anti-slip fl ooring in two of their bath spaces.

“The new anti-slip will give us much improved safety,” says Nancy Wiebe, special projects assistant for the Salem Foundation. Wiebe notes the flooring in those rooms has been repaired and replaced piecemeal over the past 30 years, making for a patchwork design that has long since lost any non-slip features it may have once had.

The installation of the new flooring is slated for April, and while it will make a huge difference in the lives of both staff and residents, additional upgrades are needed to truly make the bathing rooms a relaxing environment.

“Residents deserve dignity in every aspect of their care,” said Arlen Hildebrand, Salem Foundation chair. “Their bathing experience should be calming and refreshing … and their bathing room should be a warm, welcoming space.”

To that end, the foundation hopes to raise another $29,000 to transform its five utilitarian-looking bathing rooms into something with a more homey feel.

Those plans include installing cabinets where residents can store their personal bathing items and towel warming racks to provide them with a comforting towel when their baths are done.

They also want to further create a calmer bathing space with the addition of colourful plants, towels, and paintings alongside soft music and restful images playing on LED panels.

Salem CEO Sherry Janzen points out that many of the home’s residents— upwards of 92 per cent—live with some form of dementia that can cause bath time to be a fearful and stressful experience.

“If we can make it inviting and soothing and warm colours, feel warm, at least the anxiety of having a bath is lessened,” she said. “And it gives the staff a fighting chance to be able to convince those residents that don’t want a bath to have a bath.”

The fundraiser gets underway at 3:30 p.m. with performances from Glorybound and the Christians of the Gospel Faith Church Instrumental Group. Faspa follows from 4:30-5:15 p.m.

Admission to the event is by donation, with all funds going toward the bathing room upgrades.

“The community has been very supportive so far,” said Wiebe, “and we need that continued support to complete this.”